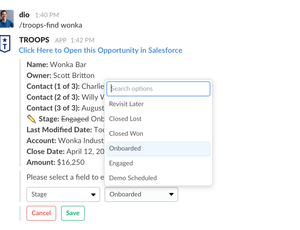 Slack developers have been able to add a few buttons to the bottom of their responses in their in-line commands, but it seems like that was starting to get a little out of hand. It’s pretty common for developers to start bending platform functionality to the point of breaking, and in this case some developers were even adding small buttons that would essentially page through options on the Slackbot response. So Slack, which at times can sometimes seem allergic to product changes, is making an alteration and giving developers the ability to add a drop-down menu to give additional responses and actions to Slackbot messages. 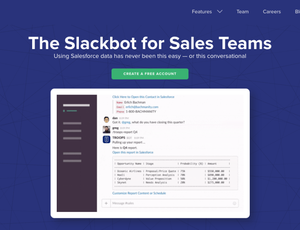 It’s a sales world these days. CRM rules everything around me (and my colleagues) seemingly every day; with a new financing, launch, or app that’s designed to make the life of the busy sales executive a little bit more convenient. And the latest tool to step into the breach sits at the intersection of the massive CRM trend and another two or three “super hot” business tech buzzwords. 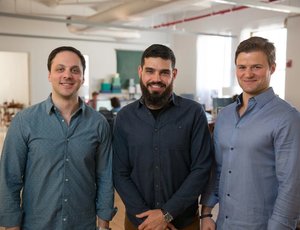 Today, New York-based startup Troops is launching its bot that helps make sales jobs easier. But if you ask the company, it's more than a bot: it's a personal assistant, powered by artificial intelligence, like Apple's Siri or the Google Assistant — only for work. 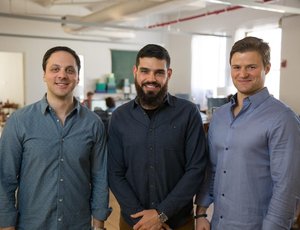 Dan Reich and Scott Britton saw the work potential of bots a year ago, when they began building Troops, a startup they envision as eventually becoming your artificial intelligence assistant for work. Troops’ first product is a Slack bot that pulls CRM data from Salesforce when you give it commands. Salespeople, accounts people, and customer success people can get the information they need without logging into the Salesforce database and filling out fields. All they have to do is type commands into Slack, which many organizations are already using all day every day to communicate. Reich, Britton, and third co-founder Greg Ratner, are veterans of the New York tech industry with multiple $100+ million exits between them. Reich formerly co-founded Spinback, which was acquired by Buddy Media, where he stayed until Buddy Media was acquired for about $800 million by Salesforce. Britton was formerly part of SinglePlatform, a startup that was acquired by Constant Contact for $100 million. Ratner was previously Director of Technology at Deep Focus. Despite their varying backgrounds, all of them are true believers in the ability of chat bots to change the industry.